As a fair warning, today's topic is going to be heavier than some of my previous posts. As I sit and look out at the bright green trees and clear blue sky of this April day in Texas, I want to talk more in depth about depression and suicide. Understandably, this is a challenging topic as many of us have personally been affected by depression and suicide either through personal struggles, the struggles of the ones we love, and/or people in our community. Suicide is the 10th leading cause of death in the United States and accounts for over 44,000 deaths annually. Unfortunately, this number only reflects completed suicides and it is estimated that for every person that completes suicide, 25 people attempt.  I feel compelled to explore this topic today as a form of education around ways to comprehend depression/suicide, to shed light on a few myths, and to provide some resources for those who might need extra help.

To begin, let's start with an image I use to help explore the impact of depression on the individual who is grappling with it as well as what it feels like to care about someone who is depressed. Imagine being your 8 year old self again -- So much energy! So much fun to be had! Neighborhood kids out playing in the street! -- but you're sick so your mom makes you stay inside. Even though you don't feel great, you stand in the door frame looking through the screen door watching all your friends outside running around, screaming, laughing, and playing tag -- without you. The feeling of being separated from the usual activities that you enjoy and seeing the world through a darker lens is common for those with depression.

Initially, there is a strong desire to keep playing even if you're starting to feel sick. The more that you're kept inside and are forced to just watch, the less you remain interested in being witness to everyone else living a lovely life while you remain apart. This type of withdrawing tends to be associated with decreased energy, change in appetite, change in sleep patterns, and increase in negative/critical thoughts. The more the body and brain withdraws from the world, the more stagnant they become. Once the brain no longer has the drive and motivation to meet basic needs, it begins to turn toward more extreme thoughts about how to make pain subside. It is in this place that self-injury and suicidal ideation often increase.

Myth number one: Depression is just being really sad. Sadness is an emotion that, while painful, actually provides information to the nervous system and drives action. Truth: Depression is the absence of the healthy aggression. Aggression has gotten a bad rap in our society as it is typically linked with anger, rage, and violence. However, healthy aggression can be understood as the capacity to move toward something you want. In these terms, we can think of depression as the shut down of the brain's natural drive system that moves us toward meeting our needs -- food, sleep, connection and meaning. Another useful frame for understanding depression is to think of it as anger turned inward -- self-attack. People with depression spend most of the day, most every day, engaging in self-attack through thoughts, beliefs, and actions. They are under relentless attack that steals their very life force.

Another aspect of this image that is important to note is that it's a nice day outside and everyone else seems to be having a great time. Myth number two: Suicide rates and depression are highest in the Winter and during the holidays. The mental link between grey Winter days and people being lonely on the holidays has provided extra weight to this cultural belief. To be clear, many people do notice increased depression and loneliness during the Winter months when there is less light, colder weather, and sometimes painful holidays without (or with!) family. Truth: While depression and suicide occur all through the year, research and statistics routinely show that there is a peak in completed suicides in the Spring.

Monthly rates of suicide based on all cases of suicide from 1970 to 2001 in the Danish Cause of Death Registry.

The exact cause of this spike is unknown but there are many environmental, social, and personal factors that play a part in the increased rates. Allergens that affect individuals in the Spring can cause physical responses in the body that increase the discomfort of those already suffering. With the change in weather, people that already feel like they are seeing the world through the screen door are now noticing with increased intensity the disparity between how they feel emotionally and the world around them -- everyone is going on a Spring Break trip but me. For others, the lengthening of the days and increased sunlight provides just enough of a mood and energy lift to motivate the most depressed person toward successful completion of suicide.

Letting people know that they are not alone if they are experiencing an increase in emotional distress in the Spring can be comforting. The grey lens of the screen door distorts a person's perspective and blocks them from some of the information that could be helpful in sustaining hope. For those on the other side of the screen door, the experience can also be difficult and confusing. Initially, you go to their door every day asking if they can come out to play. However, over time and with increased withdrawing, even those closest to the depressed individual can take their separation personally, feel unsure what to say, and feel a growing sense of helplessness in the relationship. It can be hard to feel good and be full of energy and truly understand how someone who you care about and visibly looks ok could be suffering so much. Just get outside! Go for a run! Cheer up! Being on opposite sides of the screen door interrupts the ability of two people to meaningfully connect which causes frustration and distress for both parties.

For those entering therapy, talking about depression and admitting to the presence of self-injurious behavior, suicidal ideation, or previous suicide attempts can induce significant shame. Living behind the screen door heightens the experience of isolation, shame, and hopelessness in an individual. Seeking or allowing for meaningful connection with a therapist can be an important first step toward reducing the amount of barriers to improving mood and functioning. For those already in therapy, there can be a different type of shame that arises with admitting to your therapist that despite your work together, you are struggling more than ever and are feeling hopeless. For people-pleasers, there is even pressure to please a therapist by reporting improvements, saying that you feel better, and that therapy is helping. As stated previously: Even when it's challenging -- please don't lie to or withhold information from your therapist. As a clinician, it is critically important for me to have as much information as possible about how a client is doing if I am going to be able to be an effective support. Let me be clear, talking about and addressing suicide is scary -- for the person sharing and the person listening. Even after years of practice, it is still difficult to talk to someone on the other side of that screen door and not feel worried or inadequate but it can be one of the most profound moments of connection. Even cracking the screen door open can help bridge someone to support and ultimately life.

The work of therapy will focus first and foremost on undoing the aloneness around depression. Establishing a connection to someone from this place of pain reduces the intensity and unbearable nature of these feelings. Working to increase the amount of internal resource available to a person who is depressed can re-activate energy in the system and re-establish the healthy aggression required for life-sustaining actions. Decreasing self-attack and using healthy aggression to move toward basic needs helps open the screen door enough for the person to start to see more hope. In the beginning, the therapist may serve a primary role of holding hope for the client that these changes can occur. Over time, the therapeutic relationship provides a space to address patterns, historical events, and beliefs that lead to self-attack and depression.

Depression can be lethal AND it can be treated. It is of critical importance to know both of these statements are true. Untreated depression can be lethal but there are a range of meaningful and effective treatments that can be accessed including therapy, medication, and social support. There is no magical combination of these things that will work for everyone. Finding what works for you will take some time and lots of support. At the risk of sounding like a broken record, everything is easier when we are not doing it alone.

If you need help -- REACH OUT. There is often a tendency to want to "tough it out" which can sometimes lead people to surpassing their brain's ability to recognize the need for help and to pursue it. Depression does not have to get to a critical point before addressing it. Be mindful of your mood, thoughts, energy level, and physical health and practice healthy self-care activities as a regular part of your week.Know the risk factors.  Myth number three: If I ask someone about suicide, I will give them an idea. If someone you love is talking about suicide or showing marked changes in behavior and mood -- TALK ABOUT IT. Truth: People that are suicidal are already thinking about it BUT you could be a link to life. Know your limitations. For those loving family members and friends out there who are helping someone struggling with major depression, please know that you do have limitations. Supporting someone on the other side of the screen door can be scary and exhausting. Encourage them to seek professional help. This doesn't make you a bad person and doesn't mean you don't care. More globally speaking, be kind whenever possible. By a general estimate, over 1 million people each year are attempting suicide. This means that it is more than likely that in a given day or week you are going to interact with someone who is on the other side of that screen door and trying their best to hold on. You never know how meaningful a small, kind interaction with someone might be.

Need Help? Know Someone Who Does? 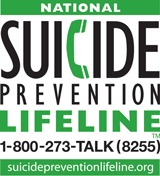 Use the online Lifeline Crisis Chat.

Both are free and confidential.